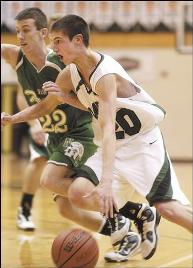 Regarded as one of the best shooters in class of 2012, Pendleton Heights guard Kellen Dunham averaged 22.5 points in his sophomore campaign and led the Arabians to an 18-6 record. Inside the Hall caught up with the 6-5 junior-to-be, who is suiting up for Indiana Elite One this spring and summer, for a Q & A:

On his sophomore season at Pendleton Heights:

“I had a lot of fun this season. I think we could have been a little bit more successful in the sectional, we got to the championship game and lost to Muncie Central. I really feel like we all improved as players and our defense got a lot better.”

On the opening weekend of AAU at the IndyBall.com Shootout:

On his game extending beyond just being known as a shooter:

“I feel like I’m trying to set people up on the offensive end. And also working on my defense. It’s getting a little better. I’m not just a spot up shooter. I can take people off the dribble now, finish at the rim and pull up.”

On the progression of improving his jump shot:

“When I was little, I shot pretty well, but I definitely worked on my shot for a long time. I spent a lot of hours working on it.”

On his visits to Bloomington this past season and what he likes about the program:

“I went and saw the Purdue and Minnesota games at Assembly Hall and they’re showing some pretty good interest. I really like Coach Crean. He’s really fun to talk to, very knowledgeable about the game. Coach Buckley also is a very nice guy. I like the program.”

On the other schools showing interest: