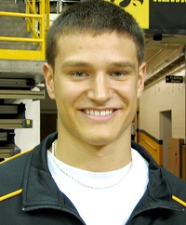 Indiana’s pursuit of a big man for its 2010 class continues to roll on full steam ahead.

The latest target is 6-9, 230-pound Sioux Falls (SD) forward Cody Larson, who was released from his Letter of Intent with Iowa on April 9.

Larson, who committed to the Hawkeyes and former coach Todd Lickliter in September of 2008, met with new Iowa coach Fran McCaffery last Thursday and requested his release.

“Anytime you have a new coach, you have a whole new program,” Larson told Stu Whiney of The Argus Leader of his decision to re-open the process. “When I committed, I did it because of Coach Lickliter, and it was hard to see him leave. I just want to make sure I find what the best option is for me.”

On Sunday, the final day of the April 8-11 contact period, Tom Crean, Tim Buckley and Bennie Seltzer visited Larson in South Dakota, according to a source familiar with the situation.

Larson, who has four official visits remaining, is not speaking publicly about his recruitment at this time, but is expected to take some time to work through the recruiting process before making a decision. The spring signing period begins this Wednesday and concludes on May 19.

As a senior at Roosevelt High School, Larson averaged 19.9 points, 7.8 rebounds and 4.1 assists, but was suspended near the conclusion of the season. Details of the suspension were not made public.

Larson’s game, which is described as a mix between a three, four and a five, reportedly has similarities to Mike Miller, who came through the same AAU program, the Dakota Schoolers. Scout.com lists Larson as a four-star prospect and the No. 23 power forward in the country while Rivals.com lists Larson as a three-star.