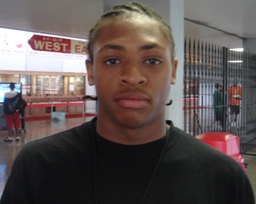 The 6-3, 195-pound Patterson averaged 16 points and seven rebounds and led Broad Ripple to a 16-7 record, the most wins for the school since the 1985-1986 season, and a city championship. Inside the Hall caught up with Patterson on Wednesday for a brief Q & A:

On Broad Ripple’s season and his injury down the stretch:

“The beginning of the year went great. When we got the end, I got a couple of injuries. Teammates got fatigued and I tried to put the team on my back, but I had a back injury. It was real sore and bruised from when I fell on it.”

On playing for a Hall of Fame coach in Basil Mawbey and the change in Broad Ripple’s style of play:

“It was a lot different because Coach likes to run a lot of plays and set screens a lot. He changed our game from last year, because we were a run and gun team last year. He changed some of that up. In some games it was part of our success and in some games we could have used the run and gun.”

On Indiana’s recruitment and his relationship with Tom Crean:

“Last time I talked to Coach Crean was after the Lawrence Central game. I like IU. It’s a great facility there to be in, great fans. He thinks I’m one of those players that can come in and play right away.”