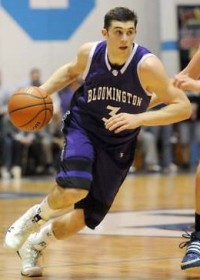 Throughout the season, Inside the Hall will keep you posted on how 2010 signees Victor Oladipo and Will Sheehey and 2011 commitments Austin Etherington and Matt Carlino, as well as other notable prospects being recruited by Indiana, are performing at their respective schools. (Note: This is not intended to be a complete list of players Indiana is recruiting. Only players with published stats are listed.)

+ Will Sheehey – Sagemont (FL): Sheehey’s senior season ended on March 5 with a 52-37 loss to Jacksonville Providence in the Class 2A semifinals. Sheehey finished with 4 points on 2-of-10 shooting.

+ Matt Carlino – Bloomington South (IN) (Pictured, Photo by Chris Howell of the Bloomington Herald-Times): 12 points as the Panthers won Sectional 15, 76-47, over host Columbus North on March 6. 15 points in a 76-37 sectional semifinal win over Columbus East on March 5. Up next: Evansville Harrison on March 13 at Seymour.

+ Will Yeguete – Florida Air Academy (FL): Yeguete, who visited Indiana on Saturday for the Northwestern game, scored 16 points in a 62-59 overtime loss to Jacksonville Providence in the Class 2A quarterfinals on February 27.

+ Aaron Thomas – Aiken (OH): Season-ending 78-56 loss to Moeller on March 6 in the District 3 semifinals at the University of Cincinnati. 20 points, seven rebounds and five assists in 81-59 District 3 quarterfinal win over Hamilton on March 3.

+ Cody Zeller – Washington (IN): 13 points as the Hatchets won their sixth straight sectional title, 43-30, over Jasper on March 6. 18 points in a 54-35 sectional semifinal win over Vincennes Lincoln on March 5. Up next: Corydon Central on March 13 at Washington.

+ Jeremiah Davis – Muncie Central (IN): Eight points as the Bearcats won Sectional 8 at New Castle, 48-43, over Pendleton Heights on March 6. 20 points in 53-49 sectional semifinal win over Connorsville on March 5. 20 points in opening round sectional win over Greenfield-Central on March 3. Up next: Lafayette Jeff on March 13 at Marion.

+ Marquis Teague – Pike (IN): Five points as Pike beat Indianapolis Manual, 79-57, in a sectional semifinal on March 5. Up next: Sectional 12 championship game against Ben Davis on March 8 at Indianapolis Tech.

+ A.J. Hammons – Carmel (IN): The Greyhounds fell to Westfield, 44-38, in the semifinals of Sectional 9 on March 5. No individual stats for Hammons were reported. On March 3, Hammons scored nine points, grabbed five rebounds and had seven blocks in a 63-53 opening round sectional win over Fishers.

+ Jeremy Hollowell – Lawrence Central (IN): 20 points in 73-66 loss to Lawrence North in Sectional 10 on March 5. 10 points and five rebounds in 89-48 opening round sectional win over Arlington on March 3.

+ Ron Patterson – Broad Ripple (IN): Nine points in a 56-44 loss to Warren Central in Sectional 10 at Lawrence Central on March 3.

+ Collin Hartman – Cathedral (IN): Game-high 20 points, including six 3-pointers, in a 63-50 loss to Lawrence North in Sectional 10 at Lawrence Central on March 3.

+ Darryl Hicks – Shelby County (KY): 21 points in a 83-70 Eighth Region semifinal win over North Oldham on March 4. Up next: Owen Valley on March 8 at Henry County.