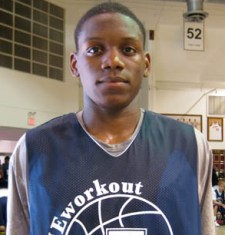 Well, actually, we’re still trying to get ourselves acquainted with the 6-7, 210-pound power forward from the Florida Air Academy. I assigned Zach the task of trying to get in touch with Yeguete’s coach, Aubin Goporo. (Well, not really, I just asked him to do it and he happily obliged.) However, those attempts have been unsuccessful.

So what have we learned about Yeguete? Not nearly enough, but here’s what we do know: He’s 18 and is in his second season at the Florida Air Academy after arriving from France. According to this story, penned last month by Mike Cherry of Florida Today, Yeguete spent several years living on the Ivory Coast.

Here are a few stat lines from recent games for Yeguete, who is unranked by Rivals.com and a three-star prospect on Scout.com:

But beyond the points, Yeguete is best known for his rebounding prowess. As of mid-January, he was reportedly averaging upwards of 15 rebounds per game. Dave Telep, the national director of recruiting for Scout.com, had Yeguete with 50 rebounds in three games in last September’s Nike Team Florida Fall Workout.

That, my friends, is what we know about Will Yeguete. We will continue to attempt to make contact with his coach and get more information, but since he’s looking like a potential addition to the 2010 class, this update, albeit brief, felt warranted. Happy Friday.