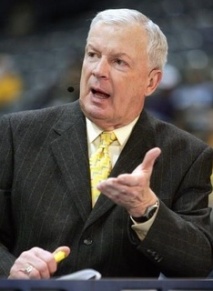 Ever feel like you really want to have a conversation with someone, but you’re not sure exactly how what you have to say will go over, so you spend time fretting over how to say it and what their reaction will be and so forth?

No? Well, I have. And the time has come for me to just get it out there. If you like it, take it. If you don’t just send it right back:

Indiana fans, stop being so hard on this team.

I know, I sound like a huge homer, and I can clearly see why it would come across that way. But the fact is that too many of the good folks in Hoosier Nation set the bar impossibly high for this basketball season, whether consciously or otherwise. (Seriously, someone had to say it, so I figured it might as well be me, because well, people hate gingers anyway.)

Look, I know last season was hard on you, I get that. Watching a once-proud program stagger and stumble its way to six wins in 31 tries isn’t an easy sight to swallow when it’s happening in front of five national championship banners. And yes, this team is markedly more talented, and deeper in almost every feasible way.

But it’s not just about talent, which this team has in good — but not great — supply. It’s about experience, and poise, and focus, and composure. None of those traits will magically blanket this team after one or two wins, no matter the quality of the opponent. They take time and patience to build, like a homemade car or a rare stamp collection.

Look, Digger Phelps agrees with me.

“The way that thing was left in shambles, you’ve just got to be patient,” Phelps said by phone last week. (Like how I snuck that up on you? Gingers aren’t well-liked, but we’re crafty.)

Phelps, an analyst for ESPN and a former coach at Notre Dame, is no stranger to the rigors of building a successful program and gives Tom Crean high marks for his work since arriving in Bloomington. Phelps says Crean had to “start from scratch.”

That’s a term I understand many have grown weary of — “from scratch.” The constant reminders about youth and inexperience on this team follow the Hoosiers everywhere, and there are those among you that believe it is too often used as a crutch, an out to excuse even the poorest play. But I’m not so sure that’s true.

After the Michigan game in Ann Arbor — the first IU game I have had the opportunity to see in person this season — Tom Crean appeared equal parts subdued and frustrated.

For the first time in almost two years, Crean appeared (to me, anyway) as though, for lack of a better term, even he didn’t know it would be this bad. Hours after the Michigan loss, he launched into one of his now-customary Twitter rolls, in which he acknowledged many of the Hoosiers’ deficiencies and talked about the mental state of the team.

“These guys want to be good. We have to find our way,” he said via Twitter. “It’s very challenging but it’s coming. I feel a bounce on the way. Help us push through.”

That “bounce” proved to be prophetic, as the Hoosiers upset Minnesota in overtime, and it bears pointing out that they did it coming from behind, when last season’s team probably would have folded. (Can we also give this team some credit for their work without Maurice Creek? I mean, take Scottie Reynolds off Villanova or Luke Harangody off Notre Dame and imagine the result.)

Of course, there are also going to be nights when Indiana gets played off the court. Inexperience does that.

“The guys that are juniors and seniors,” Phelps said, “they’re just going to dominate underclassmen.”

It’s just a reality of college basketball, one that probably means losses to the likes of Michigan State, Purdue, Illinois and even Northwestern are on the horizon.

The process is longer than anyone probably expected, because what yardstick could we ever have used to measure the totality of this task when it began? But according to at least one basketball expert, things are headed in the right direction.

“A force in the Big Ten,” Phelps sad. “That’s where I see Indiana in two years.”