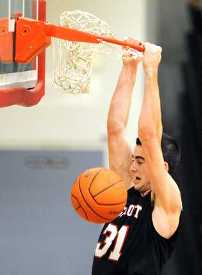 + Victor Oladipo – DeMatha (MD): The 6-3 Oladipo scored 17 points in a 54-52 DeMatha win over Good Counsel on January 5. (Video clips from that game are available here.) Oladipo had 10 points in a 63-61 DeMatha win against McNamara on January 8.

+ Will Sheehey – Sagemont (FL): Sheehey posted 27 points in a 58-31 Sagemont win over Boyd Anderson on January 9 in the Dr. Martin Luther King Jr. Basketball Classic. Sheehey was named MVP of the game against Boyd Anderson. On January 5, Sheehey scored 15 in win over Westminster and on January 7, he had 31 points in a 81-50 win over Parkway. (Photo courtesy of MiamiHerald.com.)

+ A.J. Hammons – Carmel (IN): The 7-0 Hammons, who picked up a scholarship offer from Indiana over the weekend according to Evan Daniels of Scout.com, scored six points in a 60-40 Carmel loss at Center Grove on January 8. Hammons attended the Indiana-Illinois game on Saturday.

+ Cody Zeller – Washington (IN): The 6-9 Zeller helped Washington improve to 10-0 with 15 points in a 70-56 win at Evansville Mater Dei on January 8. Zeller also attended the Indiana-Illinois game.

+ Marquis Teague – Pike (IN): The Pike point guard had 16 points as the Red Devils won 71-66 over Perry Meridian on January 8. Teague’s father, Shawn, was in attendance for Saturday’s Indiana-Illinois game.

+ Kevin “Yogi” Ferrell – Park Tudor (IN): Ferrell, a 5-10 point guard, had 32 points in a 67-61 loss at Heritage Christian on January 8. Ferrell attended the Indiana-Illinois game.