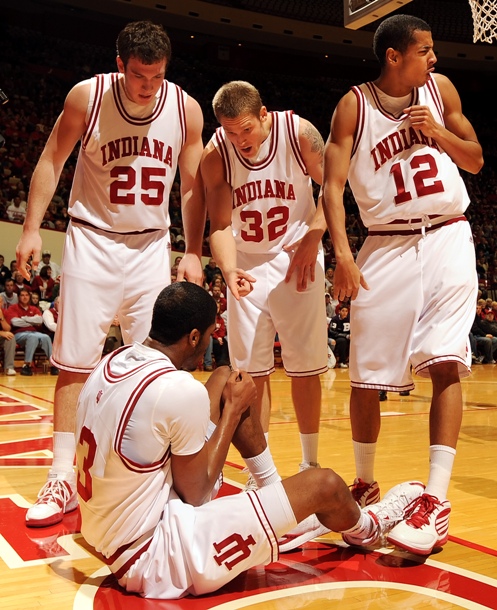 Update #2: In his postgame press conference, Indiana coach Tom Crean confirmed that Maurice Creek will have season-ending surgery on his fractured left knee on Tuesday. Team physician Dr. Steve Ahlfeld will perform the procedure in Indianapolis.

Indiana beat Bryant 90-42 on Monday night in its final pre-conference game. But the story of the game was the left knee injury freshman guard Maurice Creek suffered with 15:26 remaining in the second half. The 6-5 freshman from Oxon Hill (MD) entered the game as the Big Ten’s third-leading scorer at 17.6 ppg.

On a fast break, Creek was fouled going up for a layup and suffered an injury to his left knee. This picture, taken by Chris Howell of The Herald-Times (high resolution version available here), tells the story of just how serious this injury may be. Verdell Jones is having a hard time even looking and Derek Elston and Tom Pritchard both appear shocked. Creek was taken off the floor on a stretcher.

We’ll have more on Creek’s injury as soon as there is word from Assembly Hall.