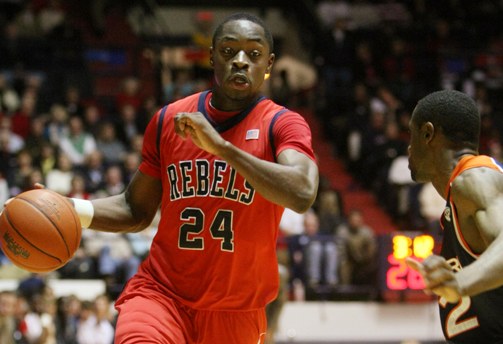 Two games into the 2009-2010 season, we’ve learned little about the Indiana team that should blossom into a respectable squad once conference play rolls around in late December. Sure, the Hoosiers have won two games comfortably, but it’s hard to judge progress against the likes of Howard and USC Upstate. We know IU is better — but how much better? Our understanding of this question will come more into focus Thursday when IU takes the floor with Ole Miss in the O’Reilly Auto Parts Tip-Off Classic in Puerto Rico.

Plagued by an injury bug that claimed guards Chris Warren, Trevor Gaskins and Eniel Polynice for the season, Andy Kennedy’s admirable coaching job in 2008-2009 led Ole Miss to seven conference wins and a 16-15 record. Warren and Polynice have both recovered from left knee injuries and are joined in the backcourt by sophomore guard Terrico White (pictured), who is projected as a fringe lottery pick in the 2010 NBA Draft.

White emerged as Kennedy’s best player as a freshman and averaged 18.4 ppg in conference play on his way to being named the SEC freshman of the year. “Rico,” as he’s called by his coach and teammates, hit close to 50 percent of his two-point attempts as a freshman, but shot just 63 percent from the foul line. Expect Jeremiah Rivers to draw this assignment.

Warren, a 5-10 guard, was averaging 19.6 ppg last season before tearing his left ACL in a December game against Louisville. He’s started the season slow offensively, but he shot 39 percent from three as a freshman, which suggests he’s due to break out of his early slump sooner rather than later. The 6-5 Polynice is a physical guard that can defend. He led Ole Miss with 1.6 steals per game a year ago and was 25th in the SEC in with 5.3 rebounds per game.

Up front, Tom Pritchard, Christian Watford and Derek Elston will have their hands more than full with Murphy Holloway, who Basketball Prospectus calls one of the best offensive rebounders in the country. He’s only 6-7 and doesn’t block many shots, but IU must keep a body on him. Joining Holloway in the front court rotation: 6-9 DeAundre Cranston (13.5 ppg in two games) and 6-8 freshman Reginald Buckner, who was the No. 29 player nationally in 2009 according to Rivals.com.

All in all, this looks like a probable NCAA Tournament team that could give Indiana more than it’s fair share of trouble. Lightning quick point guard? Check. Strong backcourt running mates that can score the ball? Check. Size inside that can rebound? Check. Sounds like it’s time to get out that measuring stick, Hoosier fans.