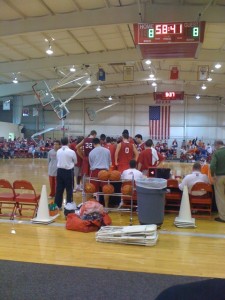 Close to 800 Indiana fans packed Nolan Fieldhouse in Sellersburg, Indiana on Saturday afternoon to watch the 2009-2010 Hoosiers practice and scrimmage.

The team took the floor just before 4PM and the event began with some opening words from Tom Crean, who thanked everybody for coming. One-by-one, the Indiana players and coaches introduced themselves to the crowd. A couple of players didn’t speak loudly enough, including freshman Christian Watford, who Crean told, “start over, freshman.” The introductions ended and Crean urged fans to cheer, boo and sit back and enjoy.

+ The practice kicked off with the players navigating their way towards the basket off the dribble and attempting to finish against two assistant coaches, Bennie Seltzer and Roshown McLeod, who were both waiting with football pads.

+ After taking a beating from the pads, the focus shifted to defense with Crean and Tim Buckley stopping a couple of different times for teaching opportunities: “Be active, be active, be active,” “Hands up on every catch,” and a question for Bawa Muniru and Tijan Jobe after both were beaten by manager Michael Santa, “How does this guy get past two seven-footers?”

+ Crean called for a sub for Capobianco just minutes into the scrimmage after the freshman failed to dive for a ball. “Dive for the loose ball,” Crean shouted.

+ The offensive flow this week had much more flow than the Hoosier Hysteria scrimmage. Rivers and Jones were the two most effective offensively. Rivers was especially good at getting into the lane and also at knocking down his jump shot off the dribble.

+ One focus was pushing the ball up the court after a made basket. When the ball wasn’t pushed at a pace suitable to Crean, he made it known, “We are not walking the ball up,” he exclaimed.

+ Watford’s presence was most felt from the perimeter, where he showed the ability to knock down a mid range jumper and did an excellent job of staying within the flow of the offense. He seemed to tire in the later stages of the scrimmage, which lasted a solid 45-50 minutes.

+ Hulls, per the usual, played a solid floor game and looks to be in very good shape conditioning wise. Most of his efforts were spent on setting up his teammates with scoring opportunities.

+ The big men were each worn down after IU’s second practice of the day. Pritchard looks to stronger in the upper body than he was last season. Capobianco got Crean’s message about diving on the floor and was active on the boards. Elston showed a knack for the ball and was the best rebounder on the court. Muniru and Jobe both played hard, but both struggled with reacting to the speed of the game.

+ Creek stayed on the perimeter for the most part and knocked down a couple of three-pointers. Dumes did a nice job creating offense off the dribble, but was out of control at times. Roth is quicker and stronger, but still needs to add another dimension to his game.

+ The practice ended with a that required 86 lay-ups be made in two minutes and the crowd cheered as the team hit 90. Crean thanked the crowd for their support and attendance and then signed autographs and posed with pictures with hundreds of fans to wrap up the day.