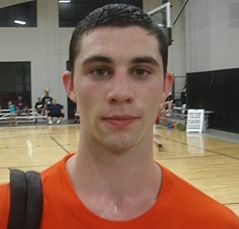 Austin Etherington wasn’t the only 2011 commitment at Assembly Hall for Friday’s Hoosier Hysteria. Matt Carlino, who moved to Bloomington over the summer and will play at South this season, attended his second straight opening IU practice. Inside the Hall caught up with Carlino on Monday evening for a Q & A:

On last year’s atmosphere at Hoosier Hysteria versus this year:

On how the adjustment has been moving from Arizona to Bloomington:

“The adjustment’s been good. It’s just more time indoors which means equals more time in the gym. I’ve gotten along with all my teammates really well. They’re all really good guys. And all the coaches on the staff are really great. The school aspect is actually a little harder.”

On the benefit of playing in open gyms at IU:

“It’s really fun. It’s challenging, so that’s always fun. It shows me that basically I need to work on my strength because they’re way stronger. Other than that, it’s just fun playing with all of the IU guys and then watching them play during the season.”

On his relationship with Austin Etherington and Cody Zeller:

“Me and Austin have a really good relationship as do me and Cody. I try to Cody once a month maybe. This month I’ve talked to him more since I’ve been seeing him lately. We need a big man, he’s not just a strict big, but just a guy that size is so valuable. He can play really well. That’d be awesome if he came.”

On the fan support at Hoosier Hysteria after IU went 6-25 a season ago:

“I think they’re crazy. (Laughs.) I’m just kidding. It just shows how much everyone cares about the basketball there and it shows a lot when you can get that much support. As a player, you’ve just got to work hard. You don’t get that everywhere, at all. There’s not anywhere that I know of that would go on. For the fans to be that loyal, you’ve got to be loyal to your commitment to the program.”

On the keys to a successful season at Bloomington South: