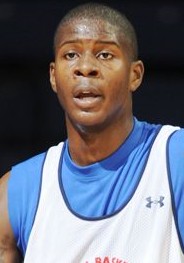 Add another five-star guard to Indiana’s 2010 wish list. The Hoosier staff will visit the home of 2010 guard Josh Selby next Tuesday according to his mother, Maeshown Witherspoon. Selby, who de-committed from Tennessee over the summer, is rated No. 4 nationally by Rivals.com and No. 10 by Scout.com.

Jody Demling of The Louisville Courier-Journal has the scoop:

“Indiana is new,” Witherspoon said. “It was last night. But what I told everybody is that it was going to be hard to make a decision because we were not going to exclude any schools.

“I could never do a list because we didn’t want to count anybody out. Coach (Roshwon) McLeod was the point man and I have also talked to coach (Tom) Crean.”

Witherspoon said the coaches didn’t talk about Kyrie Irving or the late inquiry about Selby only saying they “apologized” for not getting involved sooner. Irving has long been an IU target but the Hoosiers are battling Duke, Kentucky and Texas A&M for Irving.

We’re not sure how, if at all, this news affects Indiana’s pursuit of Kyrie Irving, who recently announced an official visit to Kentucky on October 15. Selby played with IU commit Victor Oladipo last season at DeMatha but transferred to Lake Clifton (MD) for his senior season.