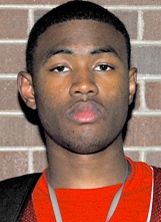 Moses Morgan, a 6-5 wing from Palo Verde High in Las Vegas (NV), took an official visit to Indiana this past weekend. Morgan is rated No. 138 nationally in the 2010 class by Rivals.com and is the son of former IU player Winston Morgan. Inside the Hall caught up with Morgan for a Q & A.

On his visit to Bloomington:

“It was a great experience going out there and seeing the campus. I was real impressed. Everybody knew who I was, knew who my dad was and they’re real basketball fans. I got to see how the team practiced, the individual workouts. I was real impressed with how hard they went and how Coach Crean pushed them. I got to spend time with Verdell Jones, Jeremiah, Christian. The team went to the football game and we went to dinner a couple of times with Coach Crean. It was a pretty good experience.”

On upcoming visits to other schools:

“I’m going to DePaul on Saturday. I did have Arizona State, but they just got a commitment, so I’m not sure I’m going to be going there. So it’s just DePaul right now.”

On the schools still involved in his recruitment besides Indiana and DePaul:

“There are still other schools. I’ve got Minnesota and Clemson.”

On his timetable for a decision:

“I’m not sure yet. I want to sign early in November. I’m not sure when I’m going to be making my decision. After DePaul, I’m going to sit down and talk with my dad and see what I want to do. I should know by then, sometime next week if I’m going to take anymore visits or anything like that.”

On how the visit helped Indiana in his recruitment:

“It did help Indiana. Seeing the campus and just being around the team and the coaching staff. They have a great team, a great group of guys to be around. It did help them out. I got to know more about Coach Crean because I haven’t talked to him since April. So just sitting down with him, talking to him and getting to know him, getting to know the team, like I said, it did help them.”

On what his father, Winston, was able to show him on the campus:

“He just showed me where he stayed at and where he played at, the HPER. I got to meet his doctors that used to be there, I met his counselor and people like it. That was pretty cool.”

On what he’s taken from the recruiting process: