Only a freshman: Darryl Baker making a name for himself 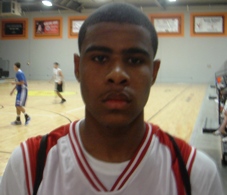 If there’s anyone qualified to judge a basketball talent at Jeffersonville High School, former Mr. Basketball, state champion and McDonald’s All-American Sherron Wilkerson would be the man.

Wilkerson, a former IU guard who recently accepted a head coaching job at Herron in Indianapolis, coached Jeff guard Darryl Baker this summer on Team Southern Indiana. He’s been a family friend of Baker since he was born.

“He’s as good right now as I was as a junior in high school,” Wilkerson told Inside the Hall of Baker. “It’s kind of a double-edged sword for the kid because he’s had so much success at an early age that mentally he doesn’t understand just yet what it’s going to take to sustain a high level. He’s so young, so that’s going to come with time. His athletic ability to attack the bucket and his understanding of the game is extremely high.”

The 14-year old Baker attended both of IU’s Elite camps this summer and Wilkerson said he’s fielded calls from Evansville, Purdue, Connecticut and Xavier inquiring about the 6-1 guard.

“Matt (Denison) did a pretty good job in July of getting those guys seen by midwest college coaches and a lot of them like Darryl Baker,” Wilkerson said.

With four years of high school still ahead before he’ll step on a college campus, Wilkerson said the most important part of Baker’s development will be dedicating himself to getting better everyday.

Wilkerson, the last player to attend IU from Jeff, was dismissed from the team by former coach Bob Knight in 1996 and hopes he can pass along the lessons he learned to the younger generation, including Baker.

“The biggest thing is not on the court, it’s off the court,” Wilkerson said. “That’s the hardest part. In theory, you’re really only spending two to three hours a day on the basketball floor. The rest of the time in your personal life, in the public eye, you become a target. It’s almost a situation where you really almost have to quarantine yourself because you’re going to have your naysayers and you’re obviously going to have people in your corner.”

“There’s a fine line you have to walk to keep yourself grounded and that’s the part I struggled with. Hopefully he’ll take heed to the advice that I’ve been trying to give him and so far he’s done a pretty good job.”