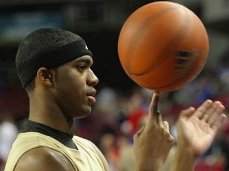 New Herald-Times IU beat reporter Dustin Dopirak is wasting no time getting himself acclimated to the workings of Hoosier athletics. Dopirak was on hand for Wednesday night’s IU Tailgate Tour stop in Indianapolis with a pen and notepad in hand. Here are a couple of items Tom Crean addressed for IU fans (complete transcript here):

The eligibility of Maurice Creek and Bawa Muniru: “There’s some technicalities with it. We’re looking forward to them being cleared very soon. We don’t have any reason to believe that they won’t be. it’s just a matter of it getting done. The paperwork that goes into it, it’s all there. Hopefully we won’t have to revise their schedule at all. Right now I can’t tell you exactly what we’ll do there. We’re going to wait and hope we hear something by the end of this week or the latest hopefully by the beginning of next week, I’ll be disappointed if we don’t hear something by then, that they’ll be cleared and ready to go.”

On Bobby Knight’s induction to the Indiana Hall of Fame: “I was all for it. It’s just a matter of looking out and saying ‘Let’s get it done.’ I think it will be fantastic to be able to walk into that building and have people walk into that building and know that their coach is honored with all of the other greats at Indiana, because certainly it’s one thing to have him in the Naismith Hall of Fame, but with everything he did at Indiana, the shelf’s not full yet. Let’s get the shelf full and get him in there.”

Crean’s comments are a good indication that from the IU perspective, Creek and Muniru have completed the necessary requirements to be declared eligible by the NCAA. Unless there’s more to the story, it looks like all six freshmen will be ready to roll come October.

As far as the comments on Knight, both Crean and Fred Glass should be given kudos for attempting to bring him back to Bloomington. The gesture to induct Knight into the Hall of Fame and put on the full court press for his return is a brilliant move. If Knight shows up, many of the fans who are still angry that he’s gone (they still exist, believe it or not) are suddenly back on board. And if he doesn’t, the finger can no longer be pointed at the university for turning it’s shoulder and not acknowledging Knight’s accomplishments. Sounds like a win-win.