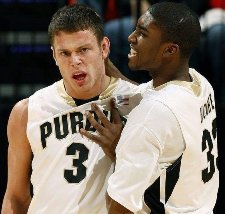 Indiana released it’s 2009-2010 schedule earlier today and here’s a look at five of the toughest opponents on the docket.

5. Maryland (Assembly Hall, December 1, 7:30 PM, ESPN2): Senior guard Greivis Vasquez returns to lead a Terrapin team that went 21-14 a year ago, advanced to the second round of the NCAA Tournament and should be among the top 25 teams in the country. The Venezuela native averaged 17.5 ppg, 5.4 rpg and 5.0 apg as a junior and tested the NBA Draft waters before deciding to return. Besides Vasquez, Gary Williams returns three other starters. It will be the first trip for Maryland to Assembly Hall.

4. Michigan (Crisler Arena, January 14, 9:00 PM, ESPN/ESPN2): Year three of the John Beilein era in Ann Arbor could find the Wolverines square in the middle of the Big Ten race with Michigan State and Purdue. After winning one game in the NCAA Tournament a year ago, Beilein has the pieces in place to make a run deeper into March. The one-two punch of guard Manny Harris and forward DeShawn Sims is arguably the best in the conference and the supporting cast is strong with guards Laval Lucas-Perry, Stu Douglass and Zack Novak all returning.

3. Michigan State (Assembly Hall, February 16, 7:00 PM, ESPN): The Spartans knocked off a pair of No. 1 seeds in Connecticut and Louisville a year ago before falling to North Carolina in the national championship. Forward Goran Suton and guard Travis Walton are both gone, but Kalin Lucas returns as the front runner for Big Ten Player of the Year. Sprinkle in a healthy Delvon Roe with wings Durrell Summers and Chris Allen and the Spartans could be looking at Tom Izzo’s sixth Final Four appearance.

2. Kentucky (Assembly Hall, December 12, 12:00 PM, CBS): The Billy Gillispie era was short lived in Lexington and the Wildcats swung for the fences by hiring former Memphis coach John Calipari. The move paid immediate dividends as Calipari brought in the nation’s top recruiting class, highlighted by point guard John Wall and forward DeMarcus Cousins. Jodie Meeks opted for the NBA Draft, but forward Patrick Patterson returns to anchor the front court with Cousins and freshman Daniel Orton. Kentucky will be a consensus top five team nationally, but are there enough basketball’s to keep everybody happy?

1. Purdue (Mackey Arena, March 2/3/4, TBA, TBA): The rivalry between Indiana and Purdue will only become more heated as Tom Crean and Matt Painter battle for in-state recruits to build their programs. The Boilermakers figure to be in the race for the Big Ten regular season title and this late season test on the road could be the toughest of all for a young Indiana team. E’Twaun Moore, Robbie Hummel and JuJuan Johnson should all compete for first team All-Big Ten honors and Chris Kramer returns for his final season in West Lafayette.