Highlights from Tom Crean’s appearance on The Drive 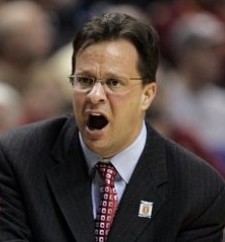 This is a couple of days old, but Tom Crean was on The Drive on JMV late last week and talked about a variety of topics including recruiting and reality television. You can listen to the complete podcast here. Here’s a transcript of some of the highlights from Crean’s appearance:

On the recruiting strategy for the next three classes:

“This year it’s really more of just kind of finding exactly what we need. Being picky. Which is what we’re trying to be because we know what positions we’d like to address right now. But really what’s so important is that we treat the next three classes really the same way. We’ve gotta treat the rising seniors, the rising juniors and the rising sophomores the same way. Because what happens, when you lose the ability to build on those classes, is there’s no question, I’ve said this before, we’ve been behind on the class of rising seniors because people have had so many years to dive in and get to know those guys and last year we had to put together a class for this coming season but we also had to put a team together for this past season. We don’t want to get caught behind as we continue to move forward. So what we’re trying to do is spend a lot of time with all three of those classes, really much the the same way.”

On the prospects for an IU basketball reality television show:

“We’re not going to do that. And I probably let that go a little too long out of friendship. That’s just not us, it’s really not and I don’t think our program needs that kind of stuff. There’s a lot more risk than there is reward to that and maybe it’s just my fear of what happens with reality television. Our biggest thing is, we’ve got a story here but we want our story to be about improvement, we want our story to be about leadership and teamwork and all of those that are going to go into making us successful. And I’m not sure it needs to be played out in a reality show.”

On his feelings about the incoming recruiting class:

“I’m extremely excited. Maurice Creek and Bawa Muniru are continuing to make strides in the areas that they have to make them in academically. So we feel like it’s just a matter of time there before they’re on campus. The four that are here, Jeremiah Rivers has had a very good summer. He was here for the first session taking summer classes and now he’s bouncing back and forth. He got to spend a week with his father in Orlando when he was with his summer league team. You can’t beat that. When you have someone that has that kind of opportunity to be around that kind of basketball, it’s great for you. I feel good about the progress we’re making, I feel good about the summer that we’re having. I think some of the players, from my understanding, have done a great job with the summer. I think some have done an average job with the summer. I think the whole message of, when we get on the court together, the individual competitors that are here that turn it into a real competition, those are the ones that are going to win out. So I’m anxious to see how that all turns out. I can’t wait to have a year after year when we have a full gamut of scholarships and we have a full gamut of competition.”