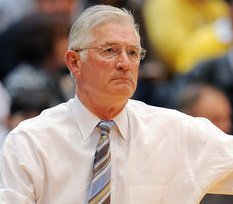 As reported on Wednesday, 2010 forward Dominique Ferguson is transferring to Hargrave Military Academy. This is not exactly surprising given the rumors about Ferguson leaving Lawrence North started circulating over a month ago.

What is a bit surprising are the comments made by the head coach of Lawrence North, Jack Keefer, regarding Ferguson and his decision to leave the school.

Keefer has long had a reputation for accepting players from other schools, including Greg Oden, who moved from Terre Haute. More recently, Ferguson himself bolted Franklin Central to come play at Lawrence North.

But now that Ferguson is no longer one of his players, his former coach is sounding off. Remember, we’re not talking about a professional or even a college player. He’s a teenager. Witness these comments from Thursday’s Indianapolis Star:

“Dom did not fit into being a Wildcat. The workouts and the classroom work and the discipline and teamwork were not what he was looking for. We have a great team here, a possible state championship team. I’m sorry he doesn’t want to be part of that.”

“He wasn’t qualified and wasn’t taking his summer classes that he needed to get caught up.”

Hear that sound? It’s Keefer backing up his Mack truck and then running over a high school kid. Bad work ethic? Check. Trouble in the classroom? Check. Not fitting in with the team? Check.

Regardless of what you or I think about Ferguson, it’s important to remember that he’s only in high school. The fact that Keefer publicly questioned his academic work ethic is out of line regardless of whether or not it’s true. I don’t remember it being an issue during the last high school season, so it shouldn’t have been an issue now.