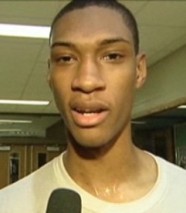 According to a report by Kyle Neddenriep of the Indianapolis Star, the 6-9 Ferguson will finish his high school career at Hargrave Military Academy.

The buzz that Ferguson would not return to Lawrence North started at the JR/SR all-star game at New Albany, when he didn’t show up because of a reported injury.

As recently as June 22, Ferguson told Jody Demling of the Louisville Courier-Journal that he would return to Jack Keefer’s program for his senior season.

Ferguson is considering a list of schools that includes Arizona, Cincinnati, Connecticut, Depaul, Duke, Florida, Indiana, Kentucky, Oklahoma, Tennessee, Texas, and West Virginia. The Hoosiers have not offered a scholarship.