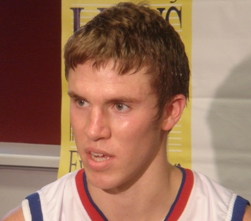 After a 78-65 win Saturday evening in Conseco Fieldhouse, the Indiana All-Stars headed south to Louisville looking to complete a sweep of the Kentucky All-Stars at Knights Hall on the campus of Bellarmine University.

And they did just that.

Mr. Basketball Jordan Hulls was just 1 of 9 from the field and finished with four points. But like he normally does, Hulls played a solid floor game and dished out five assists, grabbed five rebounds and had two steals. His future teammate at Indiana, Derek Elston, had four points and eight rebounds.

Audio: Indiana all-star coach David Wood, Hulls, Peck and Stephan Van Treese addressed the media following the sweep of Kentucky. You can listen to the audio from the press conference in the embedded audio player below.