Crean on academics, jucos and recruiting getting younger 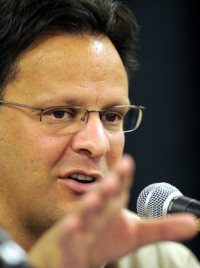 Tom Crean met with the media early this afternoon and you can read a large portion of the transcript right here. Here are a couple of the more interesting responses he gave, including a very long and detailed answer about recruiting becoming younger. (Note: the question on recruiting getting younger is not on the link to the transcript provided by IU media relations.)

On the academic performance during the spring semester:

“We’ve had a very good semester. In reference to them, it appears Nick has accomplished what he needed to accomplish and it appears that Malik didn’t. Which really is not surprising either way. Both are eligible, that’s not the question, but in the form of looking for that 2.6. But we’ve had some guys really do an excellent job. We’ve had some guys continue to build on what they did and some guys really pick themselves up academically. All the grades aren’t in yet completely, but they’re close. I’d say were eighty to ninety percent of the way in right now. And that’s good feeling, a really good feeling.”

“I don’t look at them in a negative light at all. This is one of the great things about being at Indiana. It’s one thing to recruit a player off a team. It’s another thing to recruit a player from a program and there are so many great programs in the state of Indiana. And you appreciate them more when you are in them because you are around them on a consistent basis. But it’s the same thing with junior college programs, the one-hit wonders, the players that just got in there. It has to be a special case, they have to match a lot of those criteria I mentioned earlier. But it is a lot easier and a lot better feeling to be recruiting excellent programs and there are some excellent programs at the junior college level without a doubt. We would never shut the door on that, or on an international player, we wouldn’t shut it on a transfer and we obviously wouldn’t shut it on a high school player. Do we evaluate and scout it and scour as much as possible and talk about it and dialogue about it? Probably not. But when we do, and there are people that we are tracking now, we are going to go full-fledged after.”

On whether Indiana will take a APR hit due to Malik Story’s grades:

On how he approaches recruiting young prospects after schools like USC and Kentucky offered scholarships to an eighth grader:

“Would I want to offer an eighth grader? It would have to be an extremely, extremely special case. Would we know where the eighth graders are? Absolutely. Because if you don’t, you’re behind. If you’re not actively recruiting people are freshmen, meaning being visible at their practices and games, getting them on campus for unofficial visits; we learned, I don’t think the count is done, but since we took the job last April, when you look at all the unofficial visits, when you look at the tickets used for games, we were at 286. And I don’t think the count’s over yet. And that doesn’t even count what we would hope to have this weekend because we can meet with people the day before or the day after in the sense that there’s a lot of different rules we have to follow depending on where people play.”

“But again, it’s the visibility that you have to have. If you’re not there, they know it. And that’s one reason we still feel like we’re behind in the 2010 class. Because we had to spend so much time a year ago in getting a team on the floor and then recruiting the present day seniors, or rising seniors at that point to be here. Well, our opponents had already done all of that. They were just putting the finishing touches on that. And so that puts up behind a little bit. But again, the visibility is so important and that’s, again, when you can expose your university and your program in different ways, it’s a huge part in what’s going to happen for you in building that. And frankly, Indiana lost some of that. And we’ve gotta work extremely hard to get it back.”

“That’s where having a great fanbase and great fan support is such a huge part of it. We’re asked all the time, I know the coaches are, I get asked this, it’s a common question, ‘what can we do to help?’ Well, you’re very limited on what you can do to help. But you know what, you can be loud, proud, you can wear your gear, you can be visible. You can show that support throughout the state. And when you’ve got a basketball state like this, where I Know people have to miss the games, I know I do. I’d like nothing more than to be able to watch basketball this weekend outside of a tape or a NBA basketball game, but I can’t. But our fans, they can. They can have an opportunity to see what’s out there. And all of those things down the line, it’s all part of the equation.”

“My son’s in the fourth grade, so I guess I’m exposed to it even younger right now. But I’m not offering him a scholarship. He knows he’s set. He’s going to walk-on if he wants to at some point. Though he’d be a hard guy to coach (laughs). I see all of those kids, so that kind of fun. But I’m not sitting there watching them and how I’m going to be recruiting them in a couple of years. But frankly, once they become seventh graders, they’re prospects now. Which is mind blowing. It really is. It’s mind blowing to know that seventh and eighth graders have to be considered prospects. But again, recruiting’s getting younger and younger. But, no, we don’t have meeting’s on the Hoop Scoop’s fourth and fifth grade rankings right now. Now eighth and ninth grade? We know who those are. Maybe down the road and watching my son playing sports, you see things along the way and say yeah, I remember when I saw you play when you were this age or that age, but that’s not why I go to the games right now.”