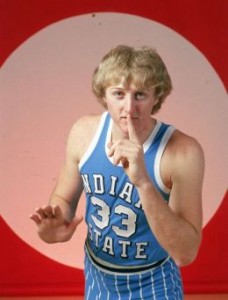 CBS and Sports Illustrated’s Seth Davis has a new book out, titled “When March Went Mad: The Game That Transformed Basketball.” For my work at Yahoo!, I had the chance to read an advance copy of the book and interview Davis about it the other day. Here’s a confession I’ll make: I did not know the Larry Bird-leaving-IU story. I mean, I knew it, vaguely, but I didn’t know the details of it, which is why this excerpt from the book interested me. I assume it will interest you as well:

The start of classes only intensified Bird’s feelings of isolation. Here he was, a poor, sheltered, intensely introverted teenager who had barely set foot outside his hometown of fewer than three thousand people, and he was stuck without any friends on a campus of more than thirty thousand undergraduates. He couldn’t get over the fact that he had to walk several miles just to get to class. And, as he often said half-jokingly, “I ain’t no genius in school.”

If he thought he might get some emotional support from the coaches, that notion was quickly dispelled as well. One night, while walking down the street with Jan Condra, who had also enrolled at Indiana, at Larry’s behest, and her sister, Larry looked up and saw Knight walking toward them. He stiffened and readied himself to speak to his head coach for the first time since arriving on campus. Knight walked toward Bird; Bird said hello — and Knight blew by without saying a word. “Larry didn’t say anything, but I could tell with his demeanor that his feelings were hurt,” Condra says. “Larry was used to people being a lot nicer to him. He didn’t like Coach Knight’s personality.”

Knight would later regret treating Bird so coldly. “Larry Bird is one of my great mistakes,” he said. “I was negligent in realizing what Bird needed at that time in his life.”

Bob Knight, for all his faults, was a great coach, but come on, dude. You let one of the all-time greats slip through your fingers because you couldn’t say hello to him on his walk back from class? Couldn’t give him a quick fatherly nod or something? Some sign you recognized he existed? It’s not Knight’s fault Bird was so thin-skinned, but really. Help the greatest player to ever come from Indiana (right? is there someone else that takes this title?) out a little bit.

Anyway, if you want to read the interview about all this stuff, including about how Larry Bird almost didn’t play basketball after he left Indiana, Part One of my interview with Davis is here, and Part Two is here.