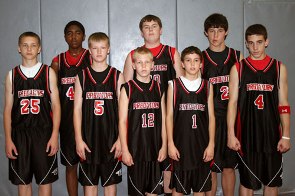 With the world of recruiting in college basketball spinning out of control, the brass at the NCAA finally decided it was time to close the loophole of coaches recruiting kids without regulation in the seventh and eighth grade.

This will no longer be the case:

The organization voted Thursday to change the definition of a prospect from ninth grade to seventh grade – for men’s basketball only – to nip a trend in which some college coaches were working at private, elite camps and clinics for seventh- and eighth-graders. The NCAA couldn’t regulate those camps because those youngsters fell below the current cutoff.

“It’s a little scary only because – we talked about this – where does it stop?” said Joe D’Antonio, chairman of the 31-member Division I Legislative Council, which approved the change during a two-day meeting at the NCAA Convention. “The fact that we’ve got to this point is really just a sign of the times.”

Schools had expressed concern that the younger-age elite camps were giving participating coaches a recruiting advantage, pressuring other coaches to start their own camps.

Props to the NCAA for stepping up on this, but this should have been done a long, long time ago. Coaches evaluating and developing relationships with middle school kids is nothing new. And it was a lose-lose situation for the schools and the kids.

Coaches were being forced into recruiting younger kids out of competition and fear that another school might get in on the next big player first. But for every prodigy that is discovered early, there are 100 that stop growing, don’t improve and are old news to coaches that were once salavating over them by the time they’re in ninth grade.

The reality is that even with this new defintion of a prospect, the pressure to win at all levels will continue to force coaching staffs to find ways to recruit by bending but not breaking the rules. Such is the nature of the beast.

{Thanks for ITH reader Kelin for the tip.}