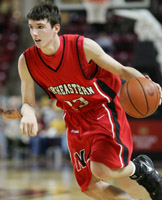 Indiana will take the floor Monday evening for the first time since a 72-54 loss at Kentucky on December 13 for a meeting with the Northeastern Huskies.

Northeastern (5-4) was selected to finish second in the Colonial Athletic Association and returns all five starters from a team that went 14-17 a season ago.

“They are impressive on film with their athleticism and their ability to play inside-outside,” Indiana coach Tom Crean told reporters at his weekly press conference. “They are well-schooled and well-traveled in that they played a lot of different types of basketball teams this year. They have beaten a Big East team in Providence, and it will be a very good test.”

The Hoosier backcourt will have its hands full with senior Matt Janning (pictured), a preseason All-CAA first team selection. The 6-6 Janning is averaging 16.2 ppg.

Joining Janning in the backcourt is sophomore guard Chaisson Allen, who made the CAA All-Rookie team last season and is averaging 10.2 ppg and 3.6 apg. More importantly, Allen is the point man for a club that is averaging just 12 turnovers per game.

“They have good size inside and they know how to utilize it,” Crean said. “They are a pretty athletic team. We watched some of the games from early in the season and you see that.”

+ Northeastern dropped it’s only game to-date with a Big Ten opponent, 76-56 to Michigan, back on November 12.

+ There should be no limitations on Verdell Jones as he had a full week of practice.