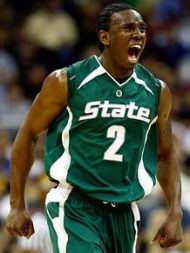 The All-Big Ten preview is ITH’s look at our picks for the top players in the Big Ten this season. Today: Raymar Morgan of Michigan State.

Raymar Morgan returns to East Lansing for his junior season as arguably the top returning player in the conference. (Sorry Robbie Hummel.) Morgan was a second team All-Big Ten selection last season and averaged 14 points and six rebounds for a team that reached the Sweet Sixteen and then ran into Derrick Rose.

With the departure of the inconsistent Drew Neitzel, Tom Izzo will now rely on Morgan to be his go-to-guy and he should thrive in that role. According to Izzo, Morgan worked tirelessly on the one major hole in his game, the three-point shot, during the offseason. If he can consistently hit from outside, he becomes a huge matchup problem.

Ultimately, the player of the year in the conference probably comes down to Morgan and Hummel and I’m giving Morgan the nod because I think Morgan is the more complete player and I like the Spartans to win the Big Ten.