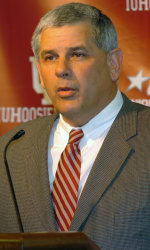 Via The Hoosier Scoop, Inside the Hall has obtained IU’s response to the NCAA as well as a statement from Athletic Director Rick Greenspan. Here is the statement from Greenspan:

BLOOMINGTON, Ind. – Indiana University has submitted a written response to the NCAA Committee on Infractions regarding Allegation 6 which charges the University with “Failure to Monitor” in the Association’s ongoing investigation regarding the men’s basketball program.

“We have submitted our response as instructed by the NCAA,” said Director of Athletics Rick Greenspan.  “President McRobbie has consistently stated his strong belief that the IU athletic department met or exceeded standards in the area of monitoring, and we hope for a successful adjudication of this allegation.”

The Athletic Department has also released three documents that include the complete detailed response sent to the NCAA Infractions Committee:

Obviously, there’s a lot of information to dig through in these documents, but let’s hope this is the last significant development in this whole ordeal and the NCAA reaches a verdict before the season tips off. The last thing Tom Crean needs is the uncertainty of a fiasco he had no involvement in hanging over his first season in Bloomington.