The Hoosier Scoop has the, ahem, scoop: The NCAA faxed a letter to IU today telling the school it was being granted an extra nine days to send its response to the NCAA’s allegations that Kelvin Sampson did some very naughty things. What’s more, the letter from the NCAA specifically tells IU not to file its response ahead of the new deadline. 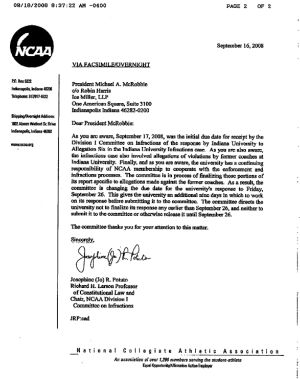 This is where I drop any pretense of having any clue what’s going on here and just ask: What’s going on here? Why would the NCAA push back its self-imposed deadline, and then force IU not to respond before a new deadline? Are they really just not finished with their work? Did someone take an untimely vacation? Is the office printer low on toner?