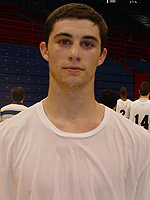 Inside the Hall caught up with Indiana’s latest commitment, 2011 guard Matt Carlino, to get his thoughts on the Elite Camp, his decision to commit early to the Hoosiers, his relationship with the coaching staff and more. Carlino is ranked No. 8 nationally in his class by the Hoop Scoop.

On his experience at the Elite camp and his decision to commit to IU:

“The elite camp was great. There were a lot of great players there and alumni. The coaches were great and they taught me a lot when I was down there. The decision was basically I loved Indiana so much that I didn’t think I needed to see anything else.”

On whether or not he followed Indiana as a kid:

“My dad was always a fan of Bobby Knight and so was I when he was at Indiana. I’ve continued to stay a fan of Indiana since then.”

On the experience of being in Assembly Hall:

“I had been there when I was in 4th grade. My brother and I got in there and were just shooting buckets. We thought it was the coolest thing at that age just to go shoot at Assembly Hall. One of the players actually let us, because they were about to practice, so he let us in there and we just got up a few shots. It was in the dark but it was still cool to go look up at the banners. It’s just an amazing place.”

On his relationship with Tom Crean and the coaching staff:

“I had known Coach Crean when he was at Marquette. I met him last summer and he just treated me and my family really well when we were down there. When he got the job at Indiana, I was really excited because I had been a fan of Indiana. He’s such a determined coach and I really like that about him. I think he has a great ability to get players to the next level.”

On the parts of his game he’d like to improve on:

“I’m always looking to improve on everything — all aspects of my game. Definitely getting stronger because the Big Ten is a very physical conference. It’s known as the most physical. Just working on all of the things Coach Crean tells me to like my pick and roll game and becoming a more consistent shooter.”