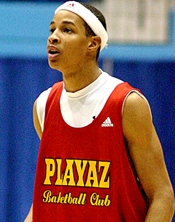 The 2009 recruiting class Tom Crean and staff have assembled in his short time in Bloomington is impressive. And with the hiring of Roshown McLeod, it could be getting a five-star boost in the form of St. Anthony’s (NJ) guard Dominic Cheek.

In an interview published Thursday morning by Adam Zagoria of Zagsblog.net, Cheek talked about his interest in Indiana and his relationship with Crean and McLeod:

Remember that three-year rebuilding plan that most of the fanbase was resigned to? Adding Cheek to the already stellar 2009 class could put the Hoosiers back on the map as early as 2009-2010. There’s still a ways to go before Cheek makes a decision, but the fact that he’s planning an official visit to Bloomington coupled with his relationship with McLeod is encouraging indeed.