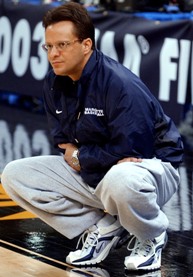 Now that the ink has dried on Tom Crean’s 10-year deal, we’ve taken a closer look at the document and have a Cliff’s Notes version for those of you that didn’t feel inclined to dig through all 22 pages:

— The compliance language is plentiful. Crean is responsible for the coaching staff, players and all other individuals under his direct or indirect supervision. In the event that Crean becomes aware of a compliance issue, he’s required to report it in writing to the Athletic Director.

— Section 2.02 deals with rules violations and the consequences if a violation occurs. Essentially, the language reads that if Crean, an assistant coach, a player or a staff member is involved in a NCAA rules violation, IU reserves the right to suspend him without pay or terminate his employment.

— Crean’s wife and children will be able to travel on the university dime to all away games, including tournaments.

— Crean will receive two “late model” automobiles for his use.

— For his marketing and promotional efforts, Crean will be compensated as follows:

— Crean is allowed to pursue outside endorsement opportunities approved by the Athletic Director, but he must report a detailed earnings report on or before June 30 each year.

— Crean will be compensated as followed for on the court success:

— The termination legal speak begins on page 11 of the document. The gist is that IU has the deal set up in a way that any notice of a NCAA rules violation gives cause to fire Crean. We can also refer to this as the “Kelvin Sampson provisions” portion of the contract. Hopefully the lawyer who forgot to include this type of strict language in Sampson’s deal has been fired.

— In the event that Michael McRobbie is removed or resigns from his seat as President of IU, Crean has the right to renegotiate the termination portion of the deal.

— And finally, in the unlikely event that IU decides to get rid of Crean without just cause, the school will owe him the lesser of $3 million or his base salary for the years remaining on the deal.