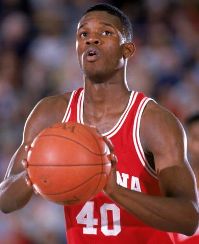 The ballots have been counted and it’s time for Inside the Hall’s countdown of the greatest Indiana players of all-time. Today: No. 1: Calbert Cheaney.

The case for Cheaney: While Cheaney is missing the biggest credential that defines greatness, a national championship, he is the leading scorer in Indiana and Big Ten history. He is one of only three Indiana players to be named team MVP in four straight seasons (Steve Alford, A.J. Guyton). Cheaney won all 12 national player of the year awards in 1993, won two Big Ten championships, was a three-time All-American and was a part of a Final Four team in 1992.