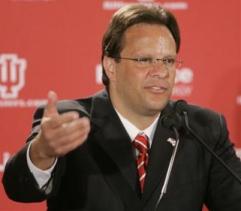 IU just issued a press release on Tom Crean officially signing a 10-year deal with the university and we’ve uploaded a copy of the contract for your reading pleasure.

Bloomington, Ind — Indiana University has officially signed Tom Crean to lead the Hoosiers men’s basketball program to a 10-year contract that will pay him $600,000 per year in base salary and an additional $15.72 million in outside marketing and promotional income during the life of the deal. The agreement is retroactive to April 2, 2008 and expires on June 30, 2018.

“I left a very special situation at Marquette when Indiana offered me this opportunity,” said Crean. “I wanted to make sure that if I left, I would be going to a place that would be a destination for my family and allow me to build a program for the long haul with the same security.”

Crean also could earn an additional $560,000 per year in incentives should the Hoosiers win the Big Ten and NCAA Championships in the same season.

“I appreciate the confidence that President McRobbie and the University have shown in me by offering the two additional years to the agreement,” said Crean. “It is a great responsibility to lead this program and I look forward to the challenge of bringing the program the respect it deserves. The process of restoring this great program is going to take a lot of time, more than probably any of us anticipated.”

When Crean was hired in April, it was announced he had agreed to an eight-year relationship in a letter of understanding. Two years were added to the deal, not because of the NCAA’s Failure to Monitor allegation, but because of administrative changes on campus.

“It is very easy to sell the tradition that is Indiana basketball knowing that we are committed to IU for a long time and that the University believes in what we are trying to accomplish,” added Crean. “I’m especially grateful for the way Rick Greenspan, former players, supporters and the entire Hoosier Nation have made my family feel welcome and helped us during this transition.”