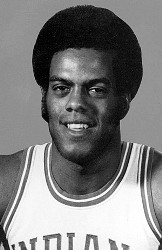 The ballots have been counted and it’s time for Inside the Hall’s countdown of the greatest Indiana players of all-time. Today: No. 2: Scott May.

The case for May: One of the hardest working players to ever wear the candy stripes, May was the first Indiana player to win the player of the year award in 1976 when he led the Hoosiers to a 32-0 record and a national championship. He won Big Ten titles in each of his three seasons in Bloomington and was a two-time Big Ten MVP and All-American. May was one of three Hoosiers taken in the first round of the 1976 NBA Draft as the Sandusky, Ohio native went No. 2 overall to the Chicago Bulls.