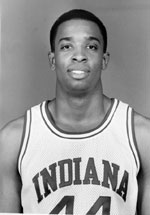 The ballots have been counted and it’s time for Inside the Hall’s countdown of the greatest Indiana players of all-time. Today: No. 10: Alan Henderson.

The case for Henderson: The numbers don’t lie: Henderson left Indiana as the only player in school history to rank in the top five in scoring, rebounding, blocked shots and steals. He played a key role in IU’s Final Four run in 1992 and helped lead the Hoosiers to a Big Ten title and the Elite Eight as a sophomore.