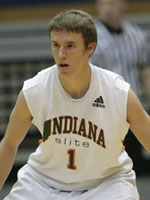 Inside the Hall got our first extended look at Bloomington South’s Jordan Hulls this past weekend at the Kentucky Hoop Fest and in our scouting report, we’ll break down the strengths and weaknesses of his game and project where he’ll fit in once he arrives in Bloomington.

Strengths: The first thing that jumps out when watching Hulls is his intelligence on the floor. He’s been well-coached and it shows as he has a knack for finding the open man and taking what the defense gives him. On Friday, he showed a quick release and a deadly shooting touch from outside. At one point, he knocked one of the nets loose and caused a slight delay in the game as the net had to be fixed. The first two games on Saturday, Hulls played more of a distributor role for the Indiana Elite One team and showed excellent court vision and the ability to go left and right with confidence. Even when he was up against talent that was physically superior, he didn’t back down from the challenge and seemed to invite contact. In the final game on Saturday, Hulls took over once again and scored 17 points to cap off an undefeated run for his team in the Kentucky Hoop Fest.

Weaknesses: The main concern for Hulls in his adjustment to the next level will be his size. Will he be able to keep up with some of the taller, quicker and stronger guards? He’s probably a shade under 6-0 and he could run into some match up problems defensively if he’s forced to give up three or four inches. Hulls admitted that improving his strength and quickness will be key to being ready to compete night in and night out in the Big Ten. His quickness seemed to be well above average and with some work in the weight room, he shouldn’t have problem putting on the mass needed to hold his own.

The Bottom Line: There is a reason that Hulls has gone from relatively unknown nationally to the No. 8 point guard nationally in 2009 by Scout.com. He’s a ball of energy on both sides of the floor and what he lacks in stature, he makes up for with intelligence and grit. He’ll give Jeremiah Rivers and Verdell Jones a run for their money to lead the Indiana attack in 2009-2010 and if he doesn’t start right away, he will certainly get his share of minutes right from the get-go.