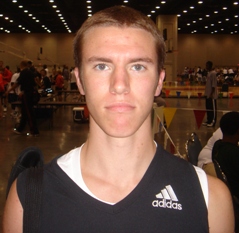 Inside the Hall was at the Kentucky Hoop Fest on Friday in Louisville and caught up with the latest addition to Indiana’s 2009 recruiting class, Bloomington South guard Jordan Hulls.

Hulls is the No. 8 point guard nationally for the 2009 class according to the latest rankings on Scout.com and helped lead Indiana Elite One to the Hoop Fest gold title with 17 points in a win over the Terre Haute Jammers.

On how he came to the decision to choose Indiana:

“The coaching staff and Coach Crean, I only knew him for two weeks and I knew I wanted to go to Indiana. He’s going to bring the program right around. I looked at all of the schools equally: coaching staff, education, chance to play for a national championship and Indiana was just the best place for me. Being a hometown kid, that definitely factored into it. Being a part of bringing the program back to what it used to be appeals to me.”

On whether or not he grew up an Indiana fan:

“I grew up an Indiana fan because all of my grandparents. They’ve been IU fans all of their lives. My grandpa actually used to coach there so when Coach Knight was there, I was a big IU fan. Then it kind of faded off a bit. I was a big fan of Coach Knight.”

On his observations of what went on with the program over the past year:

On any concerns he may have about additional NCAA sanctions:

“I’ve talked to Coach Crean about it and he said everything is going to be fine, so I’m just going by his word and I have faith in what he’s going to do. I have no worries.”

On what it’s like playing on an AAU team stacked with Division I talent:

“It’s a lot of fun. We play hard, we play well together. Playing with good players is always fun because it makes it easier for a point guard. My role is to just get the ball where it needs to be and if I need to shoot, I’ll shoot. I’m just looking for my teammates and trying to do whatever I can to win.”

On what he needs to work on to be prepared to play in the Big Ten:

“I definitely need to get quicker, stronger and I’ve still got to work on my shot and ballhandling skills. But the main thing is strength and conditioning. I really need to get in good shape so I can just keep on running.”

On the experience playing at open gym at IU over the summer:

“It’s been going well. It’s a fun group of guys to play with. They’re going to have their off days, but they’re going to be competitors and win a lot more games than people think.”