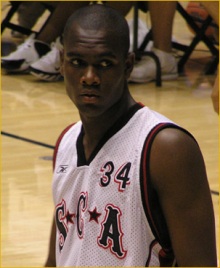 Here is an IU release on Malik Story, the latest and likely the last recruit to join the 2008 class:

“To get someone of Malik’s ability this late in the year is really exciting for all of us,” added Crean. “He is a proven winner who knows how to win championships, and has improved a great deal over the last few years. Malik was off of the recruiting radar for some time because of his early commitment, but nonetheless, he has always proven to be someone that plays at a high level, that wins, and that gets better.”

The Los Angeles product averaged 13.0 points as a sophomore and 14.7 points as a junior at Artesia H.S., helping his prep team to a 66-3 record during that two-year run. He chose IU over USC, Oregon and Georgetown.

“We are very fortunate to have him coming to Indiana with the ability to step in and help contribute in our program right away,” said Crean. “He has built his range and his ability to get to the rim, and we look for to helping him improve in those areas. We love his strength, and we love the fact that he loves the game and wants to improve. It is a pleasure to have him.”