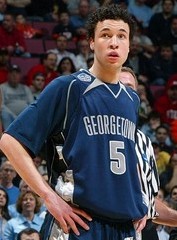 Remember that Washington Times report a few weeks ago about Jeremiah Rivers transferring to Indiana?

Well, according to our friends over at the H-T/Hoosier Scoop, Rivers made it official over the weekend.

Jeremiah Rivers committed to Indiana this weekend, a source close to the situation has told The Herald-Times.

He will sit out next season per NCAA rules and have two years of eligibility remaining.

Rivers is the seventh player in Indiana’s incoming class, and the fifth brought in by new coach Tom Crean since being hired in early April.

Rivers is a very solid pickup as he’s a great on the ball defender and an exceptional ball handler. He’s not going to light up the scoreboard in Assembly Hall, but perhaps the coaching staff can convince him to be a bit more aggressive offensively. However, let’s hope this isn’t a precursor to a press release stating that Jordan Crawford will be peacing out. That, my friends, wouldn’t be good.