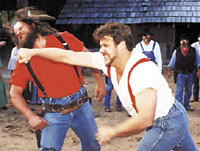 Just about everyday on the Web, you can find a story that’s a real head scratcher. Most of the time, your first reaction is “what is this sick world coming to?” You then copy a link to the story and forward it on to your friends that have a sense of humor. Not often do I get to write about these stories on this very blog, but today is the exception to that rule. Feast your eyes on this, courtesy of the Capital Times:

Arguments over basketball are commonplace when guys gather to watch March Madness, but one Madison man faces a battery charge for slugging another during an argument over whether newly appointed Indiana University basketball coach Tom Crean will have success in his new job.

According to a criminal complaint filed Monday, a bunch of friends gathered at an apartment on Harbour Towne Drive to watch the national semifinals of the NCAA men’s basketball tournament.

During the course of the game Aaron Dumas and John Capista began discussing how much success Crean would have in the Big Ten. Dumas and Capista were discussing the possibilities “when the discussion turned from friendly into a heated debate,” according to the criminal complaint charging Dumas with battery. Capista told police that Dumas became so upset he lunged toward him and “punched him in the face with a closed fist striking him on the bridge of the nose,” and followed that up with four or five more punches.

Madison Police Officer Chanda Dolsen said Capista had a red mark on the bridge of his nose and three locations on his head where redness and swelling were evident.

I mean I’m all for a little debate when I talk about sports with friends (who isn’t), but this is pretty unbelievable. It wasn’t even just one punch, it was a barrage of punches from some guy in Wisconsin over Indiana’s coach. I guess this is a good barometer of the reach the IU program has. When you have random people in Wisconsin fighting, well, you know you’re big time, right?