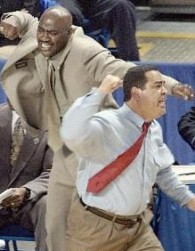 You see that gentleman to your right behind Kelvin Sampson? That’s Bennie Seltzer. Seltzer played at Washington State under Sampson in the early 90’s and then spent nine seasons on Sampson’s staff at Oklahoma before joining Tom Crean’s staff at Marquette the past two seasons. (He also played professionally in Turkey, Venezuela, Poland and Holland.)

And now, it appears Seltzer will be joining Crean in Bloomington, according to Terry Hutchens of the Indianapolis Star:

Crean appears close to hiring two assistant coaches who were on his staff at Marquette. Tim Buckley, a former Ball State coach, spent last week in Bloomington helping Crean begin the recruiting process. This week, Bennie Seltzer has been seen with Crean as well.

Seltzer spent the past two years at Marquette. The nine seasons before that, he was on former IU coach Kelvin Sampson’s staff at Oklahoma. The NCAA punished Oklahoma for making impermissible phone calls to recruits during Sampson’s tenure, but IU said Seltzer was not involved in any of the infractions.

There are two ways I think fans are going to react to Seltzer coming to IU. The first is the “Tom Crean can do no wrong” approach that most of us have taken on. You know, the one where we all put on our candy striped sunglasses and let the man work his magic.

Contrastingly, the other contingency of fans will likely ask the following questions: Do we really need a Kelvin Sampson disciple at IU? Haven’t we already had enough of Sampson to last us the rest of our lives and then some? Regardless of IU’s denial that Seltzer was involved with any of the phone call antics at Oklahoma, if IU is doing all it can to distance itself from Mr. Sanctions himself, then this is a curious move. Surely there are other qualified options to fill out the coaching staff, no?

It’ll be interesting to see how this all shakes out if Seltzer is indeed hired. Crean will have some questions, like the ones above, to answer and we’ll all be listening closely for the answers.