The Morning After: Northwestern 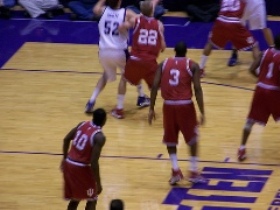 Should IU ever be happy about squeaking things out against Northwestern? Probably not. Given that the Hoosiers are 12-2 in the conference and the Wildcats are 0-14 (!), a sloppy, grind-it-out win in Evanston is probably not something anyone at IU should be too happy about under normal circumstances.

But these are not normal circumstances. The past two weeks have been strange, ridiculous, odd, crazy, emotional — they’ve veered into apathy, to anger, to resignation. A group of young men lost their father figure. Their father blew his shot at one of the best jobs in college basketball. And an assistant coach that looks a lot like a high school gym teacher — in a good way! — took over despite the threat of a boycott by his All-American center. These are not normal circumstances.

Those circumstances will linger for a while. They’ll give things meaning that might not normally have them, like D.J.’s hug for Dan Dakich last night. Any other time, that’s a hug merely of exhaustion. Last night, it was the ultimate sign of solidarity, acceptance, and a willingness to soldier on. That undercurrent will be there for a while, but if last night proved anything, it’s that there’s life after Kelvin Sampson. Basketball players play; coaches coach. That’s all it is, really.

So last night’s win was a relief. It was pure: basketball as it should be. Ball on court. Defense on offense. It was a shoddy defensive effort, a sloppy offensive one, and an all-around ugly game portending defensive weaknesses for IU. And I’m not even mad at all, because basketball is back.

— Last night’s main issue was predictable. Because Northwestern runs a junk-style backcut offense, it’s important to prepare for them carefully; they’re like no other team on the schedule. Friday, in the midst of a drawn out, clusterf— of a resignation announcement, several players boycotted practice. Later, they took a walkthrough, but even if that walkthrough was the most productive, insightful walkthrough of all time, it was but one walkthrough. Northwestern requires more prep than that. The Hoosiers didn’t get it.

And that’s why you saw the poor defensive effort. Giving up 82 points to Northwestern on 66 possessions is way, way too many. Northwestern comes into every game ready to backcut you to death, and the minute you figure out the backcut, they start chucking threes. IU clearly wasn’t ready, or if they were, they executed like they weren’t. Threes were open and were falling (Northwestern’s 58.7% effective field goal percentage tells that tale), and IU failed to contain penetration. It was an ugly performance.

— Fortunately, Northwestern’s defensive performance was much worse than their offense. They allowed IU, a team that averages 1.1 points per possession, 1.3 (that’s 85 points on 66 possessions!). They gave up a 67 percent effective field goal percentage to a team that averages around 53 percent. For as good as Northwestern’s offense was, their defense was worse, or IU’s was better — whichever you want to believe. Given the season averages, it’s fair to say Northwestern’s inability had plenty to do with it.

— After last night’s game, as well as two close wins over Illinois, I think it’s fair to say that IU is one of those teams with a knack for keeping lesser teams in the game. Fortunately, they also have an apparent ability to win those close games. (Wisconsin is excepted here, because Wisconsin is good. And that Butch three was garbage.) I’m not sure if this bodes well for the tournament or not, though obviously the ability to win close, intense games bodes well for the postseason. The unfortunate part is that it’s easy to see IU getting into one of those early-round games with a lesser talented team — say, a No. 13 or No. 14 seed — and failing to pull away until it’s too late. It’s a trend worth watching.

— The Big Ten Network’s lack of announcing prowess has been discussed here in the past. It’s unfortunate, really: Snagging a few decent color men (Bill Raftery? Jay Bilas?) would have been a way to validate the Network’s existence. It would have proven that BTN is there for more than a cheap cash grab that leaves huge segments of a rabid consumer base unserved. Some enjoyable broadcasting would have lent some legitimacy.

Instead, we get … Shon Morris. Let me count the ways in which Mr. Morris fails as an analyst:

Really, Morris’ greatest sin is that he brings nothing to the game. Broadcasting seems really hard, so I don’t begrudge him his job; it’s something I would fail miserably at the first 80 or so times I tried it. (And probably after that, too.) So the blame lies with Big Ten Network. Take all that cash you’re getting from subscription fees and hire someone good, for the love of all that is holy and right in college basketball. Oh, wait: You don’t have to, because we’ll watch anyway. Damn this closed market.

— It’s always fun to see the huge proportion of IU fans in Welsh-Ryan Arena. And trying to get tickets to the game yesterday, I realized the potency of this fan base in the Chicago area. Awesome.

— Similarly, watching Northwestern play, I always feel really bad for Bill Carmody. Here is a good basketball coach, a guy who apparently does things the right way, and who is something of an innovator in the way he runs his team’s x’s and o’s. And, because Northwestern’s academic standards are so, so high, he can’t recruit anyone. He’s stuck trying to make ends meet with kids who are there just as much for their academic benefit as they are to further their basketball careers. There’s something noble in that, sure — and Carmody appears to be in no jeopardy of losing his job — but I still feel sorry for him. Losing once is frustrating. Losing every single league game you play is soul-crushing, will-flattening stuff.

Anyway: given everything, good win. I’ll take it. And I’ll take solace in the fact that we can go back to watching basketball now, the real reason any of us are here in the first place.