IU security: No “bring back Bobby” t-shirt for you 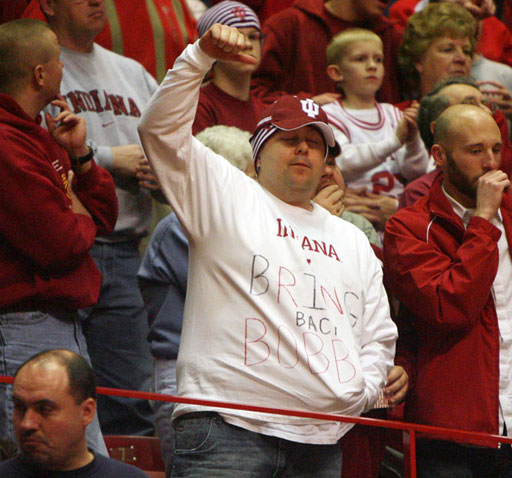 Apparently, you can’t wear a shirt that says “bring back Bobby” to an Indiana game. Or so says a man named Josh (pictured), who called into the “Front Row Ticket” on 93.9 FM in Louisville.

According to the story told to hosts Rick Bozich and Jody Demling, Josh was asked by an IU security guard during the first half of last night’s game to remove his homemade white t-shirt because it was “offensive.” His other option, again according his story, was to be arrested. So he removed it.

For the second half, he put the shirt back on and a friend sitting with him also donned a similar shirt. The security person returned and asked him to once again remove the shirt or be arrested. This was, in the words of security, a final warning.

I’m not sure if free speech is extended to those in Assembly Hall, but if this story is indeed true, I find it to be utterly ridiculous. I have to agree with the sentiments given by Josh at the end of his story: “The only people it was offensive to was Rick Greenspan and Coach Sampson.”

Be forewarned, Hoosier faithful: Don’t show up with your “bring back Bobby” t-shirts in Assembly Hall.

Bob Kravitz of the Indianapolis Star noticed this as well and mentioned it in his column today. Also, thanks to the the Hoosier Scoop/Herald-Times for the picture. Much preech, fellas.

Filed to: Bring back Bobby