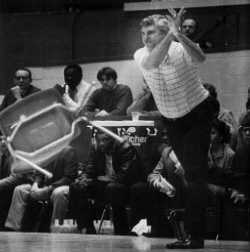 Coach Knight says “damn it, if the Hoosiers don’t start playing better, I might throw another chair.”

As always, your predictions, analysis and comments are welcome in the game thread. I think I can speak for everyone when I say that anything less than a blowout is unacceptable. Northwestern is, after all, terrible.