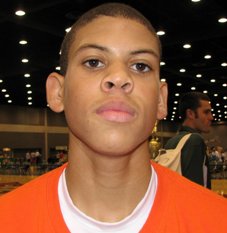 The Panthers of Bloomington South had control of the ball at tip-off and controlled much of the game throughout tonight’s match-up. Though Ray McCallum Jr., senior Javan Walker and freshman Darwin Davis helped give Bloomington North optimism at times, the depth of Bloomington South showed, as I believe four players ended the night with at least 10 points a piece. It didn’t help much that Bloomington North had a bit of trouble when they had the ball in their hands, as they had problems with turnovers in the first half.

Though I may not be exact with these statistics, Ray McCallum, Jr. ended the night with 27 points (6/8 FT), a few rebounds and steals, and Darwin Davis added 18 points as well in a 73-64 loss to #2 Bloomington South. What impressed me about McCallum’s efforts were his speed and quickness with his feet and hands, both while controlling the ball and on the defensive end as well. Though he did make some offensive mistakes with a few turnovers and dribbling mistakes (carrying, double dribbling – sometimes happens with a player known for quickness), I was impressed with the effort he gave with his consistent awareness and hustle on the defensive end.

I guess it doesn’t hurt when your dad is an assistant coach at IU (he was in attendance, along with DJ) and
former IU player Errek Suhr is one of the assistant coaches for your basketball teams. Which, by the way, I had heard Suhr had taken McCallum under his wing over the summer, after accepting the coaching position at Bloomington North, and it showed tonight. During many of the time-outs and while other players were shooting free throws, Suhr and McCallum Jr. could be seen talking one-on-one, going over different aspects of the game.

Although it was a loss, I was pleased to see another solid performance come out of the potential Hoosier as his game continues to grow.