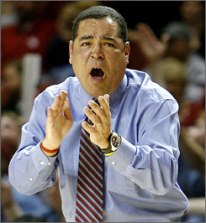 Indiana coach Kelvin Sampson was on the Zonebusters with Rick Bozich and Jody Demling moments ago and had the following to say about Eric Gordon’s injury status:

He’s doing a lot better today. That was a nasty fall. I didn’t really see it. I was blocked out when he fell, so I didn’t realize how bad it was until after the game. He didn’t come down directly on the tailbone, it was more to the side.

It was a really nasty fall. We’re not practicing today, but he couldn’t practice today if we were. Hopefully he’ll be able to go on Thursday.

Sampson added that he expects Gordon to be ready to go on Saturday against Kentucky.