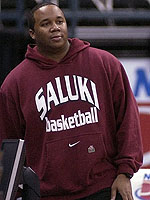 The Hoosiers are back in action tonight with their toughest non-conference road game of the season in Carbondale, Illinois.

Southern Illinois, one of the premier mid-major programs in the country, is 3-1 and No. 22 in the latest USA Today/ESPN Coaches Poll.

Indiana leads the all-time series 4-1 and won 57-47 a season ago in Assembly Hall. SIU’s lone win in the series came back in 2001 in Carbondale.

Southern Illinois is led by head coach Chris Lowery who was named the Missouri Valley Conference coach of the year two of the past three seasons.

The anchor of the Saluki attack is senior forward Randal Falker. Falker is on the Wooden Award preseason watch list and was the MVC defensive player of the year last season. Falker enters the game with averages of 17.0 ppg and 6.8 rpg. He’s hitting 81.3 percent of his free throws this season, up from 53.6 percent a year ago.

Senior forward Matt Shaw is the second leading scorer for Lowery’s club. Shaw is averaging 10.5 ppg. In the past two seasons, SIU is 10-0 when Shaw scores at least 15 points and 15-0 when Shaw grabs at least six rebounds.

Junior guard Bryan Mullins is the primary ball handler for SIU. Mullins is averaging 9.3 ppg and 6.2 assists. His assist to turnover ratio is 2.5 to 1.

One thing to keep an eye on is how the Salukis defend Eric Gordon. Last season, only two players scored 20+ points on SIU and they haven’t allowed an opposing player to score more than 20 in their past 10 games. Will Gordon bring that streak to an end?

To learn more about the Southern Illinois program, click here.