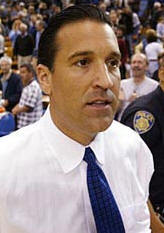 In addition to being in awe of his perfectly placed hairstyle, I’ve always enjoyed listening to former UCLA coach Steve Lavin call games for ESPN. He’s usually spot on with his analysis and also more prepared than most of the bozos the World Wide Leader subjects us to.

Lavin called the Michigan State/NC State blowout Wednesday night at the Breslin Center alongside Dave O’Brien. During the second half, he got sidetracked into talking about our boy, Eric Gordon. The result was the following:

How about Eric Gordon. In my book, Dave, right now the best freshman guard since Jason Kidd broke out of high school from St. Joseph’s in Oakland and played for the Cal Bears.

I think he’s the best freshman in this remarkable class. He’s got a shooting stroke as tight and efficient as J.J. Redick. We’re seeing his ability to get to the rim and just toy with defenders. His quickness, his smothering ball pressure, his poise and composure, the total skill set, I believe, the best guard in college basketball since Jason Kidd.

And I had the chance to coach some good ones, you know Baron Davis was very special, the third pick in the draft, but Gordon’s development is ahead of where Baron was as a freshman. He’s got the ability to beat you in so many ways. With his defense, in transition, he can three-ball you, he can post you up, get offensive boards down low, just a remarkable young player.

Hear that, O.J. and Derrick?