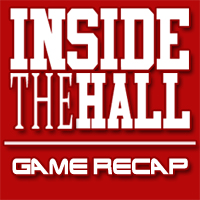 Gordon’s 24 points all came in the first half before shifting over to play point guard in the second half. Gordon shot 8 of 13 from the field, including 6 of 8 from three-point range, in 29 minutes.

Indiana lost guard Armon Bassett to an ankle injury late in the first half. Bassett left the court grimacing, but returned to the bench in the second half. Bassett finished with 15 points.

Pembroke closed the Indiana lead to seven at 31-24 with six minutes left in the first half before the Hoosiers went on a 21-11 run to lead 52-35 at the break.

Kelvin Sampson was not pleased with his team’s defensive effort in the first half.

Indiana will open the regular season on Monday evening against Chattanooga at 7 PM Eastern time. That game will be televised by the Big Ten Network.