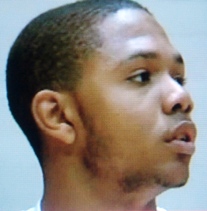 On his chipped tooth:
“He was driving, and he got around me, and he just had his elbow out and hit me right my mouth and chipped my tooth. It was chipped bad. It was chipped half way, but I got it fixed right away after the game.”

On his impression of college basketball after a month:
“As I was getting recruited, different teams had different practices, but I knew this was a lot more intense than high school, just by people’s size and strength. Coach is a lot harder on you individually, on and off the court. I kind of expected a lot of it in my college experience. In the class room, and just don’t get in trouble, that is what he looks for.”

On his biggest weakness:
“I like to learn a little more and play a little more as a point guard. This past game I played a little bit after I hurt my tooth, but I’ve just got to feel more comfortable with that and probably off the ball defense, a little bit on that. Chasing people around because coach expects me to guard a majority of the best players on these teams.”

On how people treat him on campus:
“I would say the first two to three weeks of school, everybody was talking, pointing, when I arrived on campus. You could just hear people, when I walked by, just talk about me. Now, it has pretty much calmed down. Since we started basketball season, they were already familiar in seeing me all the time, so everything is just comfortable.”

On how he handles all the attention:
“Really, I just don’t worry about it because you’ll see a lot of professionals in the NBA that might act ignorant or just anything like that. People just do bad things to other people. I’ve just been taught to treat people with respect because they might down the line help you in the future. They would just say he is a better person than just playing basketball.”

On how he stays focused with all of the distractions:
“I really just don’t worry about it. I let my play handle where it is. If I was worried about that, you would probably see a little difference in my game confidence-wise. If I just play hard every night, I’ll probably bring what people expect.”

On D.J. White:
“I would pretty much say it is D.J.’s team. He has been here for four years, and from all the publicity that he has been getting. He is the captain, and he leads us in practice and in games. He is our biggest factor.”