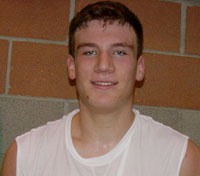 According Dave Telep of Scout.com, Tom Pritchard from St. Edwards (OH) has given a verbal commitment to become the fourth member of the 2008 recruiting class.

Pritchard is a 6’8″, 240-pound forward who is expected to give the Hoosiers some size, scoring and rebounding up front.

Pritchard visited IU this past weekend to see the campus and apparently liked what he saw enough to pick the Hoosiers over Penn State and Miami of Ohio.

I just spoke to Louisville Courier-Journal recruiting guru Jody Demling who got a chance to see Pritchard this past summer in Las Vegas. Here’s what Jody had to say:

“Pritchard is a big, strong and very skilled player that can run the floor. He made a name for himself with a sensational effort in Las Vegas against top junior Renardo Sidney and then backed up that play with some solid play the rest of the tournament.”

Pritchard is rated as a 3-star prospect by Scout and joins Devin Ebanks, Bud Mackey and Matt Roth in the 2008 class for the Hoosiers.